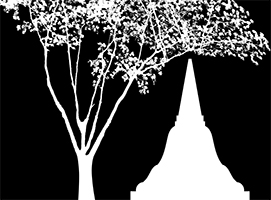 Northeastern Region of Thailand (more intimately known as "Isaan" by the Thai people) covers an area of approximately 160,000 square kilometres. It is roughly coterminous with the Khorat Plateau, which tilts from the Phetchabun Mountains in the west of the region (the location of several national parks) down toward the Mekong. The plateau consists of two plains: the southern Khorat plain is drained by the Mun and Chi rivers, while the northern Sakon Nakhon plain is drained by the Loei and Songkhram rivers. The two plains are separated by the Phu Phan Mountains.
The Mekong forms most of the border between Thailand and Laos to the north and east of Isaan, while the south of the region borders on Cambodia. The Mekong's main Thai tributary is the Mun River, which rises in the Khao Yai National Park near Nakhon Ratchasima Province and runs east, joining the Mekong in Ubon Ratchathani Province. The other main river in Isan is the Chi River, which flows through central Isan before turning south to meet the Mun in Sisaket Province. The smaller Loei and Songkhram rivers are also tributaries of the Mekong, the former flowing north through Loei Province and the latter flowing east through Udon Thani, Sakon Nakhon, Nakhon Phanom, and Nong Khai Provinces.
Isaan has a number of important Bronze Age sites, with prehistoric art in the form of cliff paintings, artifacts and early evidence of rice cultivation. Iron and bronze tools are found at notable archaeological sites, such as Ban Chiang in Udon Thani Province. The region later came under the influence of the Dvaravati culture, followed by the Angkor Empire. The latter built dozens of prasats (sanctuaries) throughout Isaan. The most significant are at Phimai Historical Park and Phanom Rung Historical Park. After the Khmer Empire began to decline in the 13th century, Isaan was dominated by the Lao kingdom of Lan Xang. Over the next few centuries, both Lao and Thai emigrants increasingly settled the region. The current eastern borders between Thailand, Laos and Cambodia was defined by a treaty reached at the end of Franco-Siamese War of 1893.

A minimum of four-day/three-night is recommended if the driving is to start and end in Bangkok. Or a three-day/two-night itinerary can be arranged with starting and ending points within the Isaan Region itself. However, due to the relatively vast distances between attractions, it is best to allow more time for a road trip around Isaan in order to truly experience the best that this region has to offer. In order to cover most of the attractions listed here, the itinerary should cover about a two-week period.

Relics Of The Angkor Empire

Reconstructing The Majesty Of An Ancient Realm

Along Western Bank Of The Mekong

Prehistoric Thailand
On The Korat Plateau

In Search Of Primitive Human Settlements